ASMR stands for Autonomous Sensory Meridian Response. What a long and confusing name! Even though it sounds like complicated doctor terminology to dress up something life-threatening, it’s actually something you and I may have unknowingly experienced (and enjoyed!).

Have you ever had a pleasing reaction to something but were unable to articulate how it makes you feel because it makes absolutely no sense? For example, I love the smell of freshly opened tennis balls. I am fully aware that the smell shouldn’t be great, it’s hardly enticing on paper. If I had to describe it, I’d say it’s a musky, muddy, petroleum, rubbery odor. Sounds great, huh? Interestingly, there is a fraction of the population who, like me, loves this smell.

And if you aren’t near tennis balls on the regular, the scent of the gasoline you pump into your car is more readily available. Some of you reading this are one foot out the door to the nearest gas station, the rest are totally confused.

For those of you who aren’t into the smell of gasoline or tennis balls, let’s just say that even though you can recognize a smell as something that shouldn’t smell good (it’s not a freshly baked cake, that’s for sure), somehow it just *clicks* for you.

Now, back to ASMR.

ASMR is a sensation of chills or tingling that starts from your scalp or back of your neck and envelops your body in the tingly sensation. The trigger is most commonly a sound, but some say they’ve achieved the same tingling feeling through certain sights as well.

And no, it’s not a rendition of Taylor Swift’s new hit song that makes you yell “This song is totally about me!” in the car with your friends and immediately perform your best “come hither” dance.

It can be anything from soft whispers, light crinkling of paper, the sound of brushing hair, and—for slime lovers like us—the sticky poking of slime! It’s different for everyone and what works for one person might not work for another.

In 2015, a study on ASMR published the most common triggers for ASMR: Even if you’re not tingling by now, can you at least begin to appreciate how these sounds might be satisfying and pleasing?

Think about nails scratching a chalkboard for one second. Are you flinching? One study found that this sound literally accelerated the participants’ stress levels, quickening heart rates, heightening blood pressure and even altering the skin’s electrical conductivity. In the study, the scientists discovered that—when stimulated with this screeching sound, the auditory cortex interacted with the amygdala, which controls responses related to fear and emotions.

It’s amazing how the different senses of your body are intimately connected, isn’t it? How a stimulus of the “sound” or “sight” senses can somehow invoke the “touch” sense?

If you are sitting there claiming “my senses just aren’t linked that way” but you’ve made it this far in the article, you’re likely curious what other people feel from ASMR and why they are obsessed with it.

Well, I’m going to offer you a shortcut: the scalp massager. This Daddy Long Leg-looking device is used by gently placing it on the scalp and lightly pressing it down, so that the “legs” glide down your scalp. Try having someone else use it on you for the best effects. 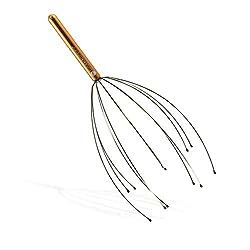 The product description, in fact, promises “tingling sensations from scalp to toes and transport…to a more relaxing place.” Sound familiar?

Why is slime satisfying? It’s not just the artistic potential with all the pretty colors and mixins.

The sound of poking and squishing slime is a common trigger for ASMR; in fact, you’ll find thousands of ASMR slime videos on Instagram.

It’s not just about creating beautiful and unique slimes. It’s also about a therapeutic way to destress.

Purchase or make slime to find out firsthand how slime relieves stress through ASMR.

Why is the internet obsessed with slime videos? You won’t know until you’ve tried it!

I can’t guarantee anything magical will happen… but I think you’ll find it #satisfying.